Starting off a blog or using a story to segue into an economic topic always felt weird to me. Even what I just wrote seems out of place so I normally avoid doing it. That being said, I should get used to doing it so forgive the introduction.

Someone recently made a comment on how history is taught, at least in the United States. He proposed that history be taught through a "civic and law" lens as a way to look at it through a more objective lens to meet subjective conclusions. As it stands now, history curriculum's are often taught through an extremely subjective lens that doesn't allow for "thought to flourish" and attempts to grasp too many subject areas. The last part of his assertion, the "grasping too many subject areas", caught my attention the most. By doing this, you create diluted conclusions about history and amplify disingenuous information.

As an example, I always found the way that economic history was taught in high schools to be fairly grotesque. The importance of monetary policy in economic downturns is under-emphasized to the point where people have a misguided or confused opinion on the reasons for specific downturns which creates a faulty foundation for analyzing current and future economic events.

In her defense, my history teacher publicly admitted that economic history was her weakest area(and she shouldn't be expected to be an expert in this area, echoing what I said earlier), but I remember learning in class that the 70s inflation was mostly caused by a supply shock, a rise in oil prices. I now strongly dispute this notion.

Supply-side shocks don't cause ample increases in nominal income. It was monetary policy, rather than supply-side effects, that caused "The Great Inflation" of the 70s. Economists felt as though there was more slack in the economy despite high inflation.

But don't just listen to me, listen to Athanasios Orphanides who claims, "that loose monetary policy was the outcome of mis-perceptions about potential output rather than of inflation tolerance" and Clarida, Gali, Gertler who claim, "that weak policy reaction to expected inflation led to indeterminacies."

In mainstream economics, most people generally accept the notion that "business cycle fluctuations in production are best analyzed from a starting point that sees them as fluctuations around the sustainable long-run trend (rather than as declines below some level of potential output." This line of thinking contrasts the views of the Federal Reserve and policy advisors in the 60s who thought potential output was a level of output above the trend level of output. Arthur Okun, former Chairman of the Council of Economic Advisors, talks about how "the strategy of economic policy was reformulated in the sixties." Economic policy was going to be based around achieving their definition of potential output rather than looking at general progress. "The focus on the gap between potential and actual output provided a new scale for the evaluation of economic performance, replacing the dichotomous business cycle standard which viewed expansion as satisfactory and recession as unsatisfactory." As long as potential output was not reached, expansionary monetary policy was needed to reach that level of output. This line of thinking was also established due to the Fed thinking policy wasn't expansionary enough during the 1957-60 recessions.(In isolation, they were correct)

This way of thinking about output made "The Great Inflation" inevitable. The Council of Economic Advisor's 1969 Economic Report shows that economists and policy advisors thought potential GDP was substantially higher than actual GDP. Today's estimates of potential output align with the Milton Friedman view of "fluctuations around a long-run trend". Modern estimates also show that the output gap was much lower in the 60s.

Essentially, old economists thought that the economy was below capacity at the time. In their eyes, this meant that higher inflation could still decrease unemployment so the Fed believed higher inflation, or, a more expansionary monetary policy was needed and desirable. Modern models and data suggest we were not below capacity at the time, meaning monetary policy was unnecessarily expansionary leading to inflation running rampant. That being said, even if we had better models at the time it would be rather difficult to know what the natural rate of output was in real time. This is why Friedman and other monetarists advocated for targeting things like inflation or money supply aggregates rather than output gaps which are faulty to deal with in real time. In addition to this information, Christina Romer shows that the mainstream view at the time was that monetary policy couldn't check inflation. This meant the Federal Reserve didn't exogenously stabilize inflation, when they could have.

To re-iterate, the Federal Reserve's views on the output gap and it's relation to effective monetary policy caused them to pursue a highly expansionary policy. They also believed that they couldn't check inflation and get a tight grip on it which lead to a high, loose and mishandled monetary policy which caused "The Great Inflation". 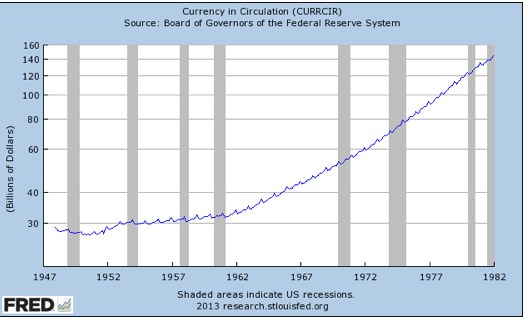 Venezuela: Its Not The Oil

There's a common misconception that the collapse of the Venezuelan economy was due to eroded oil markets and U.S. sanctions. This is usually used as a defense for big government programs, and while those programs are defensible and valid, this defense of it isn't.

Venezuela's RGDP growth started declining far before the collapse in the oil markets. In fact, it happened about a year-18 months after, at around 2013. Oil prices were also stable around this time and didn't decline until about a year later. US Sanctions didn't truly vamp up until the start of the Trump administration and sanctions under the Obama administration mainly targeted oligarchs. Rich people losing money doesn't typically cause humanitarian crises. Inflation also started to rise in 2013 along with the initial decline in RGDP before the oil market crash. Other countries that heavily depend on oil such as Saudi Arabia, Nigeria, Kuwait, Qatar, Angola, Alegria, and Brunie aren't seeing Venezuela's problems. There just isn't a case to be made for blaming Venezuela's humanitarian crisis on oil.
Posted by Jason Harrison at 4/06/2020 05:42:00 PM No comments:

No, The Federal Reserve Didn't Give 1.5T to Bank's. Yes, It's The Right Thing To Do


The 1.5T is essentially a short term loan operation in exchange for a participant's most liquid asset. The loans are used by banks to stabilize their balance sheets so that no one worries about the viability of the bank(as the systemic risk would be a huge structural problem). Once the loan is paid back the money is essentially destroyed and the Participants get their assets back. Since all the loans are collateralized, the Fed would rain financial hell on whoever doesn't pay back the loans. (Currently at 3-month maturity)

The economic equivalent of the Fed doing this for everyday people would be them giving us a lump sum of money and expecting us to pay it back the next day with high interest, something that's obviously not desirable. If we didn't, they'd take our house. Except, it's even worse than that.  It’s more like an exploitative pawnshop owner already took your $350 watch gave you $300 and said if you don’t show up with $330 in 48 hours, he keeps the watch. Except it’s not even a watch, it’s a fairly liquid stable asset.

Lastly, of course this is the right thing for the Federal Reserve to do. The Fed follows and accommodates the natural rate of interest. Even though the corona pandemic is a supply-side shock, it has negative demand-side expectations for the economy. This causes the natural rate of interest to fall. Had the Fed not been expansionary enough, monetary policy would become too tight and a recession would happen.

That being said, there's still more the Fed can do.

They can ask Congress to buy a wider range of assets.

The Housing Shortage: Worse Than We Thought

Once you divide the number of units being approved by the number of households than things get even worse. It's not only less construction compared to normal expansionary cycles, but it's lower than half of the recessions we've had.

The current housing supply is far less elastic than in the past. And you know what that means...

First off, a UBI is a fine economy policy and this is a critique of Andrew Yang's evidence to support it more than the policy itself and his methods of implementing it that make it questionable. 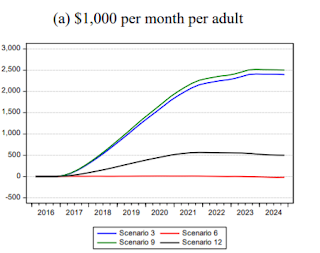 Yang cherry-picked the two scenarios with the highest growth and left two where there was minimal or no growth. The two scenarios that show high growth assume that the UBI is 100% deficit-financed. They're under the assumption that you don't pay for the UBI so it would make no senes to use them if Yang wants to pay for it without deficit spending.

Scenario 6 uses the Levy model which simulated a fully tax-funded UBI. Scenario 6 is a flat read line, meaning they found no impact on real output. They wanted to take into account the higher marginal propensity to consume of poor people so they made scenario 12. The Levy model explicitly ignores the costs of lower savings rates (which doesn't make sense if you're trying to calculate long-run effects) and they found some real output growth at $500 billion. Thats 5 times lower than the number Yang cited.

A better policy would be to implement universal Pre-k, a monthly child allowance, a moderate negative income tax(effectively the same as a UBI) and wage subsidies(a better alternative to the minimum wage)