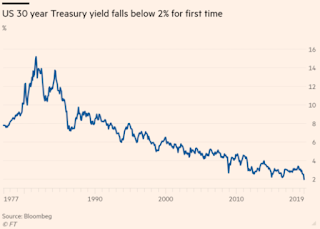 It should be noted that yields have been falling ever since the 70s so you should always take that into account before looking at market data to try to 'predict a recession; which by the way, are not forecast-able. This year, people were paying attention to the 2/10 curve because it is the most liquid bond yields in the market. The 2/10 curve is the most popular in comparison with the other curves. Others, like myself and the NY and Cleveland Feds think it's the 3month/10year curve that is more important to watch and a much more reliable indicator of recession probability. Currently, the 2/10 and 3/10 curve are both inverted/flat which is giving people anxiety about an upcoming recession. However, people should treat this as the start of the 'worrying rather than a continuation of an increasing probability of a recession since the 3/10 curve inverting is a current phenomenon.

Despite this, I still don't think there's going to be a recession; although I still feel uncomfortable about our economic outlook and I wouldn't be surprised if one occurred. The credit spread is still the same as it was during 2017 and uncertainty is largely caused by trade uncertainties. Eyes should really be on the Fed to see how they react to the economy. If Fed policy becomes too tight, then we should worry about a recession. In response to trade uncertainties which usually puts downward pressure on the equilibrium rate, the Fed should do it's best to keep rates at the eqilibrium rate since adopting an expansionary policy in response to a supply side shock is ineffective. The last Fed rate cut was good in essence, but it should have be a .50 point base cut given how markets reacted. I expected another Fed rate cut, but I also hope that the Fed looks at it's hidden contractionary policy - interest rates on excess reserves. Central Banks don't run out of Ammo, but in terms of political feasibility it would be nice to see then try to stray away from not having much room and the Zero Lower Bound.