Is the UK switching to an NGDP monetary system?

The UK  Office of National Statistics has recently announced that they would publish monthly reports on current GDP levels in their economy. Any monetary regime that has an NGDP component won't make a big monetary difference in normal time, but for crises this can be crucial to avoiding situations such as the Great Depression. You can get much more information from a monthly GDP report which would ignore supply side inflation. This can be used as a tool for not accidentally contracting the money supply when nominal GDP is rapidly falling. In 08 monthly GDP reports from June to December would have shed light on the upcoming recessions and the Fed may if been able to ease the money supply sooner. It'll will be interesting to see this play out in the next economic downturn along with the increasing willingness for central banks to pursue quantitative easing.
Posted by Jason Harrison at 5/30/2019 09:25:00 AM No comments:

The Decline of Golf Courses Is A Win For YIMBY's

According to Pellucid Corporation, the golf course development boom began in the 90s and lasted for over a decade. However, since 2006 the golf course development industry has been in a sharp decline. Nearly 2,000 gold courses have close and only 557 have opened. This situation could be good for the lower middle class and the poor. As developers seize land we can expect the supply of housing to increase. In theory, allowing prices to float at market rates should reduce the price of housing. This situation is also politically sound since you don't have to worry about displacement and gentrification. NIMBY's may try to lobby against the increase of housing in favour of large luxury developments, but this should be a net good anyways. We'll see.

Let's take a scenario where Apple is on the verge of creating a new phone that would revolutionize the mobile industry. However, a part needed to complete the phone is very rare and necessitates a large number of resources to acquire. Apple can either choose to make a large investment and spend a large sum of money to acquire said part, or they can buy it on Amazon for 200$. Obviously, they buy it on Amazon. In this situation Apple has a trade deficit with Amazon - they have 0$ and gave away $200. But, obviously, Apple isn't operating at a loss since they've gained something they wanted (at a cheap cost) that will net them profits in the future. In this way, trade deficits don't truly matter, but some people appeal to the idea of being Amazon, or in a countries case, a large aggregate exporter of materials. If you were to ask me, I'd rather run a trade surplus, like Germany, but again, it doesn't matter. However, say you wanted to reduce the trade deficit. Like Trump, you could simply place tariffs on goods, but this only reduces the deficit if there is a lack of investment being caused by the tariff. 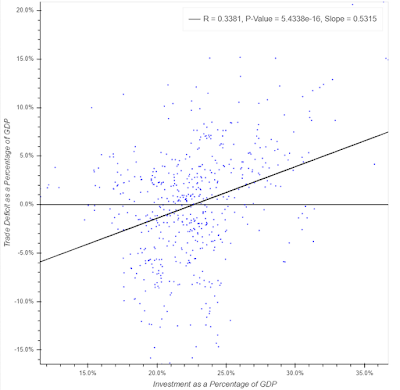 If you were to frame the tariff as reducing the deficit by reducing investment it wouldn't sell as hard since we know that, in the long term, investments are the main source of not only economic growth, but the economic well-being of the overwhelming majority of a countries citizens especially those permeating the poverty line.

In the short run, how much stuff is made largely depends on demand - if stores sell all their goods they put on more workers and have people work overtime trying to get more sales. But not all businesses can do that at once for long. Eventually, workers become scarce, wages rise and businesses find it's no longer profitable to keep producing so much and the boom ends.

In the long run, the amount of stuff we can make depends on how clever we are, how good our technology is and how much capital (tools, machines, and buildings) we have. Investment (depending on how you define it) creates these things, increasing how much stuff society can make without having to work overtime. Tariffs reduce the propensity of this occurring and increase the chance of monopoly.

The government has negative savings right now, that is it's running a budget deficit. Perhaps, a better way to reduce the trade deficit is via reducing the national savings rate.  There are many ways to do this, decreasing the federal budget deficit may be one of them. Fully funding social security is another way. Basically, eliminate all disincentives to save and thus increasing America's marginal propensity to consume. 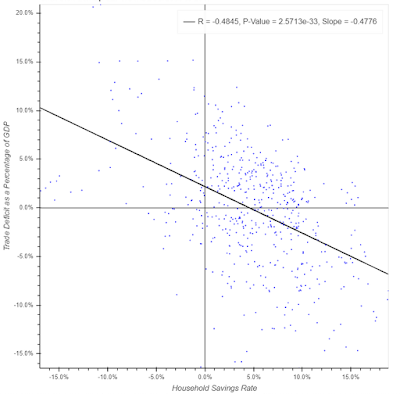 Note: It's fine to try and target certain industries and push back against China's predatory practices, but the understanding of trade, the relative randomness of tariffs, the pushback against deals like NAFTA and TPP only make China's influence stronger and show a lack of understanding of the economics behind free trade. It's fine to have a protectionist sentiment against China, but it's not fine to be protectionist.

The current U3 rate of 3.6% is a good measure of a relatively strong labour market and a net number of 236k new jobs is good especially considering that a small percentage of the labour force makes minimum wage/around minimum wage. However, this rate is interesting given what U6 and prime-age EPOP numbers are saying(stagnant). There's also a dip in the LFPR, but that's mostly just noise considering we're still having good NGDP growth which makes me less wary of a minor dip.

All this considered, the job market is strong, but not as hot as U3 implies. (Given inflation and wage growth) I'd also like to add that the natural rate of unemployment is probably going to go down from the expected 4 percent to around 2-3. In my opinion, since society is more accepting of potential workers who may have a drug history or other racial/sexuality/gender factors, you'll probably see a lower natural rate. Investments into transportation and occupational licensing reform could reduce this rate further.

3.6% is a good number, but it's not the best in 20-50 years.  We probably shouldn't be expecting it too due to our changes in productivity and since we live in a low point of innovation.